[Link to all the pictures that I took] 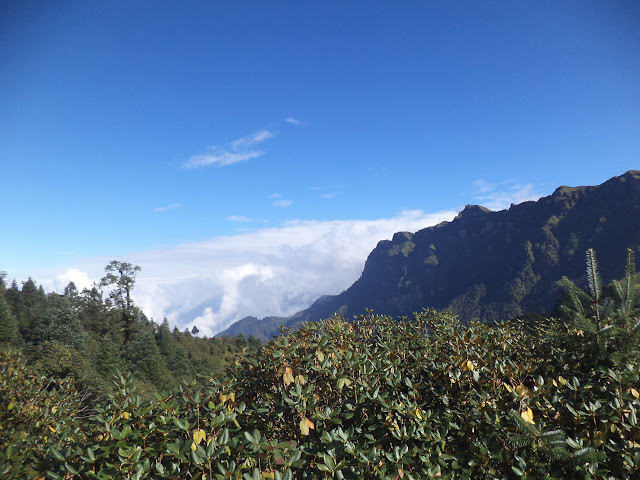 I paid Rs 426 for my ticket to Charikot.

I paid Rs 325 for my bus fare from Charikot to Kathmandu.

Tips and tricks for solo trekking

If anyone asks you whether you are traveling alone , tell them that your friends are coming behind you. That way if s/he is a potential threat, they will back off.

Put all your chargers in one polythene bag.

The sun had not yet peeped through its curtain of clouds when I boarded the so called super express bus from the old bus park and I was all set to go to Charikot. I had already bought my ticket a day before my solo trip. After 5 hours of bus ride, covering 150km from Kathmandu, I reached Charikot. The recent earthquake had its toll up to there too. 5 hrs of bus ride was not exhausting as there were a lot of waterfalls on the way. They were sort of eye candy for me.

Upon reaching Charikot, as unknown a tourist can be, I asked some locals for direction to Kuri. Carrying my 3kilo bag pack, I followed the direction. I had never traveled alone before and never had I carried anything while traveling. I would take just a few steps and before I know I would be resting. Since I had no plans of getting lost, I frequently asked the locals for direction. Little did I know, one of the fellow local was heading towards his village near Deurali.

Deurali, is also the point in the route to get to Kuri. We talked about the shortes way to Kuri and shared guava that I had bought at Dolalghat. After an hour we reached Kuri and exchanged goodbyes.

From Deurali, I started to trek alone. I had read in some blogs that bears and leopards were common there. That information really motivated me to keep pacing until I reached to Kuri. Reaching Kuri was a far cry as the 3 kilo bag and the uphill ascend was holding me back, slowing me down. 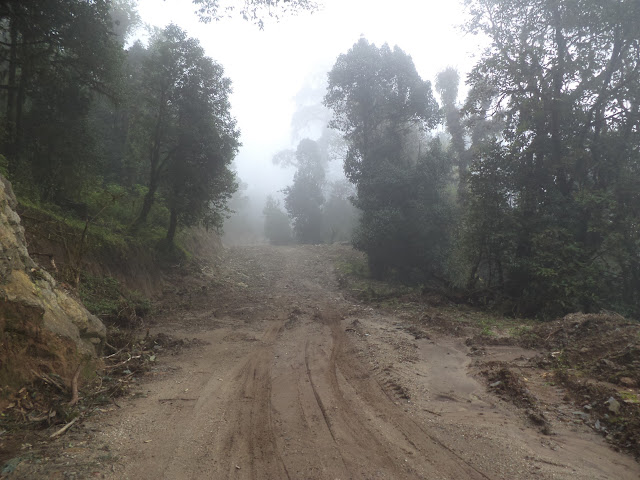 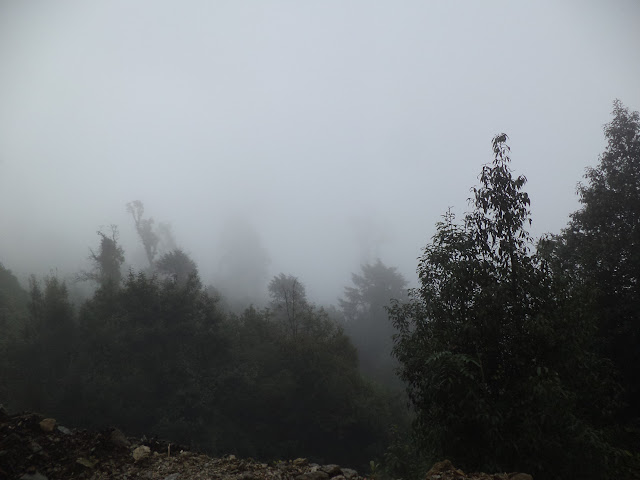 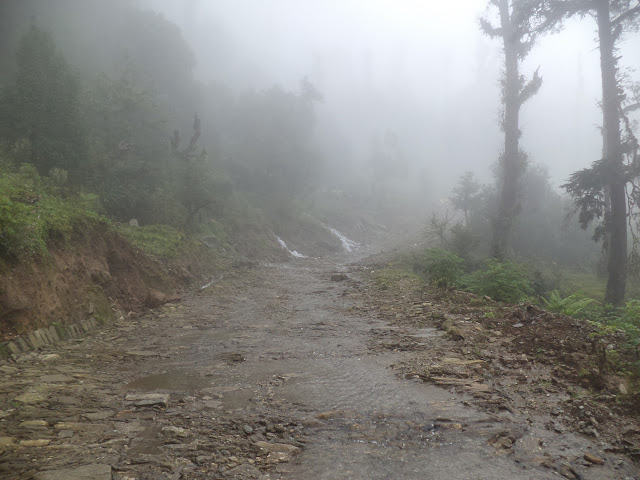 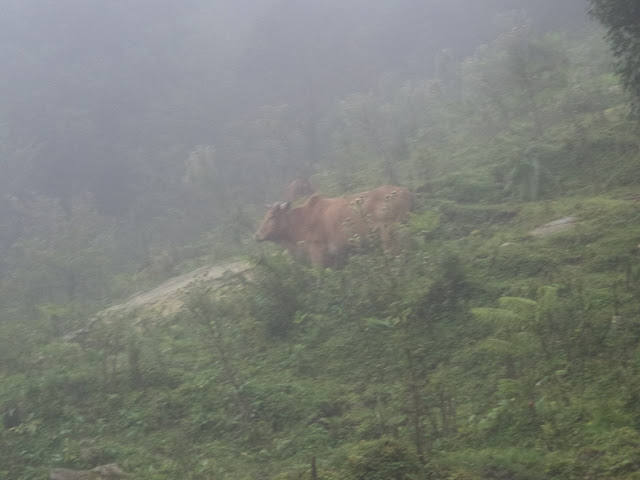 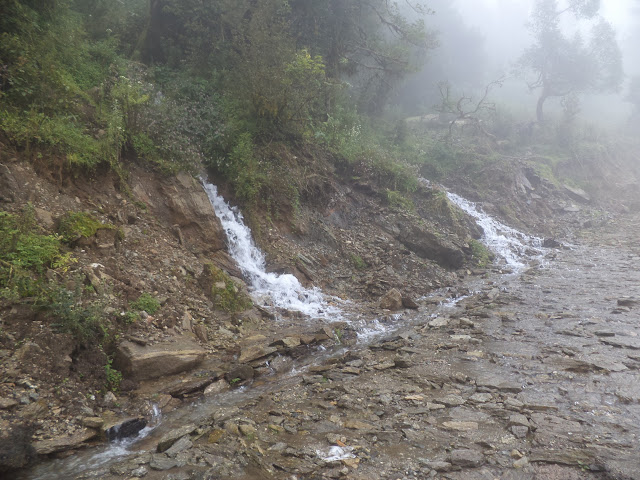 My solo trip started to get really scary as the fog started to set in and the visibility was poor. Whenever the fog moved , the trees would make rustling noise and it would drizzle too. To make the scene even more scarier there were the roaring noise of waterfalls, scary bird`s call and the branches of the tress covered with mosses hanging down like in any ghost or thriller movies. I wanted to quit so bad but I had no idea how far Kuri was. I told myself ,"This whole solo trek is what I have been whining about from a year. Now I am doing it, why quit? Look, if I survive this, then I have one hell of a story to tell. SOLO , of all of the things I could do , I choose solo. How stupid have I become?". After 3 hours of walk I saw an old man appearing out of dense fog from the opposite direction. I was so happy to finally meet someone and again I asked him about the direction and time to reach Kuri.

After another hour of hiking, I heard someone chopping trees. I again asked him for direction and he told me that the nearest settlement was just 5 mins away.

I reached there and talked with the locals. 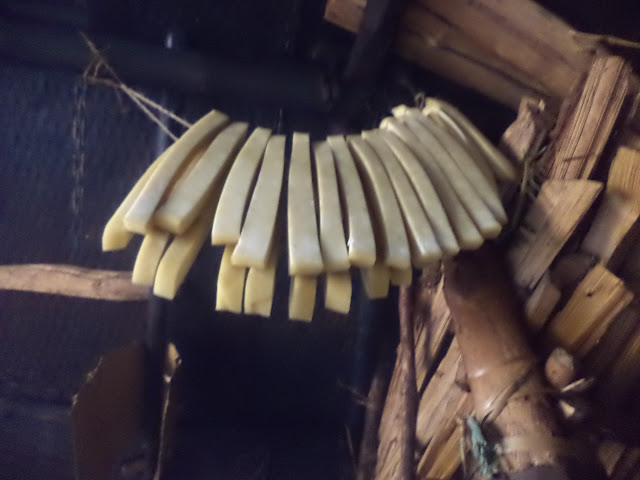 There I bought 6 pieces of churpee. Since I had to reach Kuri the very same day, I had to bid them goodbye. After walking for another hour I finally met two young guys riding down on a motorcycle. I asked them about the direction and they told me it is just 10 mins away.

Because the visibility was very poor I did not see Kuri until I reached near Kuri. I had to book the lodge as soon as possible as it was really cold up there. To satisfy my hunger I ate hot noodles. Since it was off-season there was not much options to choose from for dinner. So I settled for Daal-Bhaat-Aloo.

The morning of the very next day, I started my journey up to Kalinchowk. At an altitude of nearly 4000 m I was all alone. After I had finished worshiping to the goddess Kali, I started my descend which only took me about 30 mins.

I had to leave for Charikot as soon as possible because if the fog would again set it , it would be another suicide mission. On the way I met a local who was traveling to Charikot to sell his Churpee and he took me to Charikot.